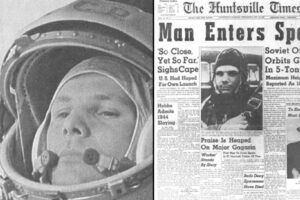 Russia on Monday celebrated the 60th anniversary of the legendary flight that made Yuri Gagarin the first man in space, a major source of national pride for millions of his countrymen.

Gagarin’s mission on April 12, 1961, marked a historic achievement for the Soviet Union, which beat the United States in a tight race to launch the first human into space.

The flight was limited to a single orbit because of questions about weightlessness, Gagarin was supposed to parachute out of the capsule on return because a soft-landing system was not ready yet.

In a letter to his wife, Valentina, Gagarin asked her to raise their daughters “not as little princesses, but as real people”, and to feel free to remarry if his mission proved fatal.

The 27-year-old cosmonaut’s mission was fraught with drama: a break in data transmission, glitches involving antennae, a retrograde rocket, and the separation of modules.

But the flight went off safely, and Gagarin became a poster boy for the communist world and is still a national idol 53 years after his death in a jet training accident.

Gagarin bailed out as planned and parachuted onto a field near the Volga River about 720km (450 miles) southeast of Moscow.

On April 14, the cosmonaut was flown to Moscow, where he was greeted by Soviet leader Nikita Khrushchev and driven into town on a highway lined with cheering Russians.

He died on March 27, 1968, after the MiG-15 jet fighter he was flying crashed near the town of Novosyolovo.

There are statues of the cosmonaut across Russia, including in a field near the Volga River where Gagarin landed after his historic flight, and the site also bears a commemorative obelisk.

A theme park was set up there to mark the 60th anniversary of his flight.

Marianna Poberzhskaya, associate professor at Nottingham Trent University, said: “There is still a lasting memory of Gagarin in Russia, his legacy is very much still alive. It is one of the few positives from the Soviet era and it has many benefits to the nationalist identity. Over the years his memory has been commercialised in Russia, through souvenirs, TV shows and statues.”

← April 12, 1981: The Flight of the First Space Shuttle Russia’s Return to the Moon and Future Russian Moon Mission Plans →