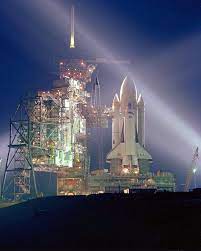 On the anniversary of Yuri Gagarin’s first flight into space (first manned flight to space), NASA launched the first space shuttle flight on April 12, 1981. Space Shuttle was the first usable spacecraft and thus it opened up a new era of space travel since now space travel could become cheaper and easier with reusable spacecraft.

The first mission of the space transport system (STS-1) or Space Shuttle, flew on April 12, 1981, ending a long hiatus in American space flight. The last Apollo lunar mission flew in December 1972, and the joint American Russian Apollo-Soyuz Earth orbital mission closed in July 1975. The National Aeronautics and Space Administration (NASA) intended that the shuttle make that permanent link between Earth and space, and that it should become part of “a total transportation system” including “vehicles, ground facilities, a communications net, trained crews, established freight rates and flight schedules and the prospect of numerous important and exciting tasks to be done.” It was to be “one element in a grand design that included a Space Station, unmanned planetary missions, and a manned flight to Mars.”

Awarded the Collier Trophy (in a tradition that began in 1911), the flight of STS-1 represented the greatest achievement in aviation for 1981. NASA, Rockwell International, Martin Marietta, Thiokol, and the entire government/industrial team responsible for the design, construction, and flight of the spacecraft, as well as the crew of the shuttle, John Young, Robert Crippen, Joe Engle, and Richard Truly, were all recipients of that award. Since 1962, NASA aerospace projects, including Mercury, Gemini, Apollo, Landsat, and Skylab, had received ten of the twenty Collier awards. Now, the eleventh in twenty years went to a NASA team that had designed and flown something remarkably different from those previous craft. For the Space Shuttle was a true aerospace craft, a reusable vehicle that could take off from the Earth, enter and operate in space, and return to an Earth landing. N. Wayne Hale, a missions flight director for the shuttle, likened it to a battleship, which while it may have only a few aboard, nevertheless had a crew of thousands stationed around the world and linked by Mission Control. Owen Morris, the Engineering and Systems Integration Division head for the shuttle Program Office, described the shuttle as a particularly complex, integrated machine and an enormous engineering challenge.

Although it flew its maiden voyage only in 1981, NASA’s shuttle program began many years earlier and predated Apollo. In the late 1950s, as human space flight began to be seriously considered and planned, most scientists and engineers projected that if space flight became a reality it would build upon logical building blocks. First, a human would be lofted into space as a passenger in a capsule (project Mercury). Second, the passengers would acquire some control over the space vehicle (project Gemini). Third, a reusable space vehicle would be developed that would take humans into Earth orbit and return them. Next, a permanent Space Station would be constructed in a near-Earth orbit through the utilization of the reusable space vehicle. Finally, planetary and lunar flights would be launched from the Space Station using relatively low-thrust and reusable (and thus lower cost) space vehicles. The perception of what became the shuttle as that reusable space vehicle associated with an orbiting space station held fast well into the vehicle’s developmental stages.