COVID19 and Future of Aerospace Engineering and Exciting Developments

Regardless of what is happening with COVID19 Pandemic, there are many exciting developments in Aerospace Technology such as the Boeing Starliner and SpaceX Scheduled Launch for Astronauts. No matter what happens Space Technology will be the salvation of mankind in the future. Please watch the video by Prof. Dr. Ugur GUVEN on his views of future aerospace developments.

The first crewed orbital launch from American soil is scheduled to lift off just two months from now, despite the coronavirus outbreak.

NASA and SpaceX are targeting mid- to late May for the launch of Demo-2, which will send agency astronauts Doug Hurley and Bob Behnken to the International Space Station (ISS) aboard SpaceX’s Crew Dragon capsule, NASA officials confirmed in a media advisory on Wednesday (March 18).

The flight, which will employ a SpaceX Falcon 9 rocket, will lift off from NASA’s Kennedy Space Center (KSC) in Florida. KSC was the jumping-off point for the last homegrown orbital human spaceflight — STS-135, whose July 2011 launch kicked off the final mission of NASA’s space shuttle program. (Suborbital flight is a different story: Virgin Galactic has launched two crewed test missions to suborbital space, in December 2018 and February 2019.) 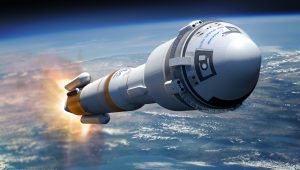