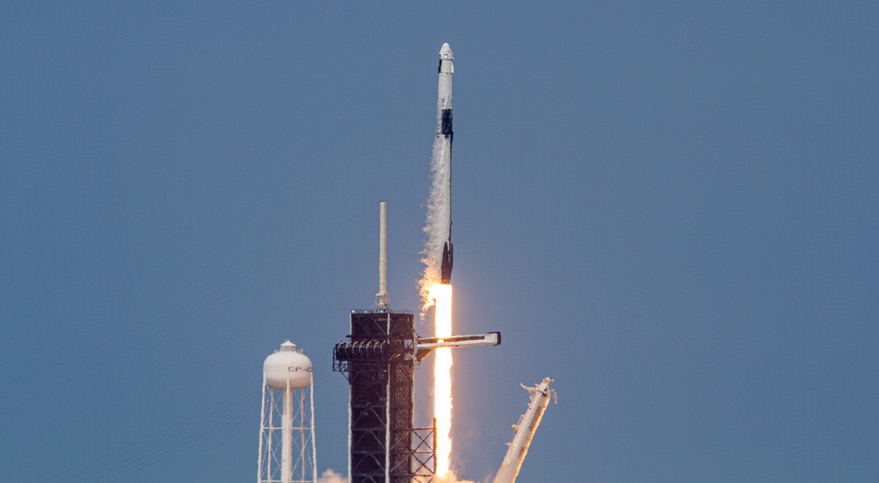 SpaceX launched astronauts for the first time ever today, making history and opening a new age of commercial spaceflight.

The launch kicked off SpaceX’s landmark Demo-2 mission, which is sending NASA astronauts Bob Behnken and Doug Hurley to the International Space Station (ISS). Demo-2 marks the return of orbital human spaceflight to U.S. soil after a nearly decade-long absence, and it signals the beginning of a new era in space exploration — one led by commercial companies.

“It was incredible,” Hurley radioed SpaceX’s launch control. ” Appreciate all the hard work and thanks for a great ride to space.”

President Donald Trump and Vice President Michael Pence were on hand to watch the launch live from the Kennedy Space Center. Trump told reporters ahead of today’s launch that he felt an obligation as president to watch the historic liftoff.

“I’m really quite overcome with emotion,” SpaceX Chief Executive Elon Musk, who founded the company in 2002, said at a post-launch press conference. “It’s been 18 years working towards this goal. It’s hard to believe that’s happened.”

“This has been a long time coming,” NASA Administrator Jim Bridenstine said in post-launch remarks on NASA TV. “It’s been nine years since we’ve launched American astronauts on American rockets from American soil, and now it’s done. We have done it.”

The launch took place on the second attempt for the Demo-2 mission, after the first attempt May 27 was scrubbed less than 20 minutes before the scheduled liftoff because of inclement weather. Weather for this attempt was unsettled for much of the day, with only a 50% chance of acceptable weather in the hours leading up to liftoff. Conditions improved, though, through the afternoon, allowing the launch to proceed.

The Crew Dragon is scheduled to dock with the ISS at about 10:29 a.m. Eastern May 31, 19 hours after launch. After docking, Bob Behnken and Doug Hurley will remain on the station for up to four months to assist the one NASA astronaut currently on the station, Chris Cassidy, while the next Crew Dragon is prepared for a launch now scheduled for no earlier than Aug. 30.

The spacecraft, which Behnken and Hurley said in a brief downlink a few hours after the launch had been named the “Capsule Endeavour,” in part after the shuttle which both had previously flown on, is working well. NASA officials said while a previous Crew Dragon spacecraft successfully docked with the station on an uncrewed test flight, Demo-1, more than a year ago, they’ll be closely watching this spacecraft’s approach to the station.

“You always learn something with spaceflight, and now having a crew on board, and understanding how the crew and the spacecraft operate as a system, and then how that total systems works approaching the station, is another big thing that we’re learning,” said Kathy Lueders, NASA commercial crew program manager, during the press conference. The spacecraft’s extended stay at the ISS, which could be up to four months, is also “a huge learning opportunity for us” to see how well the Crew Dragon and ISS operate as an integrated system.

The launch is the culmination of an effort that dates back more than a decade to develop a successor to the space shuttle for transporting NASA astronauts. The Commercial Orbital Transportation Services (COTS) program, started by NASA in 2005, supported the development of commercial cargo vehicles, including the original SpaceX Dragon spacecraft. The COTS program included an option for crew transportation, but NASA did not exercise that part of its award to SpaceX.

NASA then started the commercial crew program in 2010 with a series of funded Space Act Agreement initiatives to SpaceX and other companies. In 2014, Boeing and SpaceX won Commercial Crew Transportation Capability (CCtCap) contracts to complete development and testing of their commercial crew vehicles and for initial flights to the ISS. SpaceX’s award was worth $2.6 billion.

At the time of the CCtCap awards, NASA expected to have the spacecraft completed and certified for flying NASA astronauts by 2017. But development delays pushed back the schedule for both companies, exacerbating earlier delays in the program caused by funding shortfalls.

SpaceX flew the Crew Dragon spacecraft for the first time in March 2019 on the Demo-1 mission, going to the ISS without a crew on board. That flight was a success, but a little more than a month after the Demo-1 spacecraft splashed down, it was destroyed during a static-fire test of the SuperDraco thrusters in its launch abort system.

That accident pushed back an in-flight abort test of the spacecraft, where the capsule separated from a Falcon 9 rocket in flight, to January. That test was a success, and final testing of the spacecraft, including its revamped parachute system, cleared the way to proceed with the Demo-2 crewed mission.

The delays, along with SpaceX’s focus on other projects, like its Starship launch system, strained the company’s relationship with NASA at times. Just before SpaceX held a media event about Starship at its South Texas site last September, Bridenstine tweeted his frustration: “Commercial Crew is years behind schedule. NASA expects to see the same level of enthusiasm focused on the investments of the American taxpayer. It’s time to deliver.”

Bridenstine, at the press conference, said that SpaceX had put a new emphasis on commercial crew after that statement. “If you would have told me then that we would be right here today, I don’t know if I would have believed it,” he said, recalling that tweet. “Since that day, Elon Musk and SpaceX have delivered on everything NASA has asked them to deliver on, and at a speed that we never would have guessed.”

Behnken and Hurley both joined the NASA astronaut corps in 2000. Behnken flew on the STS-123 shuttle mission in 2008 and STS-130 in 2010. Hurley flew on STS-127 in 2009 and STS-135, the final space shuttle flight, in 2011. The two joined the commercial crew “cadre” of astronauts in 2015 to train on both the Crew Dragon and Boeing’s CST-100 Starliner vehicles, providing inputs from an astronaut’s perspective for both companies.

“This is a great time in America to be able to do this again,” Hurley said in comments May 20 when he and Behnken arrived at KSC for the launch, calling the development of commercial crew vehicles a “marathon” by NASA and SpaceX. “I think it’s kind of a culmination. It’s that next stage of human spaceflight.”

“I’m breathing a sigh of relief,” Bridenstine said after Crew Dragon reached orbit. “But I will also tell you, I am not going to celebrate until Bob and Doug are home safely.”

Musk agreed, arguing that the Crew Dragon’s reentry and landing may be more dangerous than its launch. “We don’t want to declare victory yet,” he said. “We need to bring them home safely.”