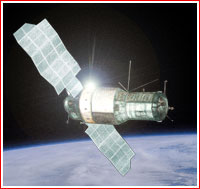 On April 3, 1973, the Soviet Union launched a small space station called Salyut 2. This was the second space station to be successfully launched (after Salyut 1) and the first military space station.

The Soviet Union told the rest of the world that Salyut 2 was a civilian space station built for scientific research, but it was secretly intended to be a crewed military reconnaissance station. No crews ever made it to Salyut 2, though. Less than two weeks after it launched, its attitude control system stopped working, and it started tumbling around in space. Mission control noticed that pressure inside the station had dropped for no apparent reason.

They later found out that a small explosion had happened in the station’s propulsion system several days earlier. The damaged station was slowly falling apart. Bits and pieces of Salyut 2 fell back to Earth and burned up in the atmosphere.