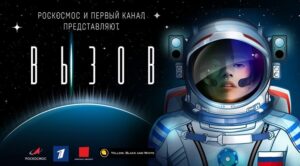 The International Space Station or ISS has been a focus point for many different science fiction movies. Especially the movie “Gravity” and the movie “Life” are very good examples of this. However, these were all created in studios in lifelike replicas of ISS. Now there will be an actual filming aboard the ISS where the movie will be filmed by a professional Russian crew.

A Soyuz spacecraft arrived at the International Space Station Oct. 5 carrying a cosmonaut as well as an actress and director who will film scenes for a Russian movie.

A Soyuz-2 rocket lifted off from the Baikonur Cosmodrome in Kazakhstan at 4:55 a.m. Eastern and placed the Soyuz MS-19 spacecraft into orbit. The Soyuz docked with the Rassvet module of the ISS at 8:22 a.m. Eastern after a two-orbit approach. The spacecraft’s commander, Anton Shkaplerov, had to perform a manual docking after a problem with the automated Kurs docking system.

Shkaplerov is a veteran Roscosmos cosmonaut who has spent 533 days in space on three long-duration ISS expeditions. The other two people on the spacecraft were spaceflight participants: Yulia Peresild and Klim Shipenko. They will film scenes for a Russian movie called Vyzov or Challenge, directed by Shipenko and starring Peresild.

In the movie, Peresild plays a doctor sent to the space station to perform heart surgery on a cosmonaut so he can return home. She was selected as part of an open casting call that resulted in about 3,000 applications. Shipenko is the movie’s director and will serve as camera operator and other roles while on the station.

The two spaceflight participants will return on the Soyuz MS-18 spacecraft that has been docked to the station since April. Oleg Novitskiy, commander of that spacecraft, will return to Earth with Peresild and Shipenko.

Shkaplerov will remain on the station with NASA astronaut Mark Vande Hei and Roscosmos cosmonaut Pyotr Dubrov, who flew to the station on MS-18. They will remain until March 2022, meaning that Dubrov and Vande Hei will have spent nearly one year in space, a record for an American astronaut.

Vande Hei said before his launch that the film would likely mean he would spend up to a year, rather than six months, on the ISS. “The opportunity to experience this with wonderful crewmates while contributing to science and future exploration is exciting!” he wrote in September.

Vyzov is often described as the first movie filmed in space, but it is more accurate to call it the first feature-length drama filmed in space. Several documentaries, including large-format Imax films, have been filmed in space. In 2008, private astronaut Richard Garriott filmed a short movie, Apogee of Fear, during a visit to the ISS.

A three-person crew embarked for the International Space Station on Friday (April 9), launching just three days shy of the 60th anniversary of the first human spaceflight.

Cosmonauts Oleg Novitskiy and Pyotr Dubrov of Russia’s state space corporation Roscosmos and NASA astronaut Mark Vande Hei lifted off aboard Russia’s Soyuz MS-18 spacecraft for a three-hour, two-orbit rendezvous with the space station. The Soyuz took flight at 3:42 a.m. EDT (0742 GMT or 12:42 p.m. local time) from Site 31/6 at the Baikonur Cosmodrome in Kazakhstan, near where cosmonaut Yuri Gagarin made history by becoming the first person to fly into space on April 12, 1961.

To honor the anniversary, the Soyuz MS-18 spacecraft was christened the “Yu.A. Gagarin” and bore the name on its exterior insulation.

“It is a big honor for us to fly and celebrate the anniversary of the first flight into space,” said Novitskiy on Thursday (April 8), addressing the Russian state commission that approved the crew’s launch.

“For me,” added Dubrov, “it is a special honor to have my first flight on such an important date when we are celebrating the 60th anniversary of the first flight into space.”

That the crew included an American underscored one of the key advancements made since Gagarin’s one-orbit Vostok mission, said Vande Hei.

ISS is an Orbiting Laboratory

Thousands of scientists have launched experiments to space. International Space Station is a great platform for running experiments in space such as microgravity experiments.   Take a look back at 20 years of their research in this:

MOSCOW, March 26. /TASS/. Russia’s State Space Corporation Roscosmos considers it inexpedient to postpone the return of the crew of the International Space Station (ISS) to Earth over the coronavirus and the quarantine imposed by Kazakhstan, the Roscosmos press office told TASS on Thursday.

“Roscosmos does not consider it expedient to postpone the return of the crew of the long-term ISS expedition 62 to Earth,” Roscosmos said.

“Indeed, some restrictions imposed by Kazakhstan due to quarantine measures are currently in place. But Roscosmos is interacting with partners and considering options of solving the problem,” the press office said.

Kazakhstan’s Health Ministry announced earlier on Thursday that 97 people in the Central Asian republic were infected with the coronavirus to date.

Kazakhstan’s president signed a decree on March 15 on declaring a state of emergency in the republic until April 15 over the coronavirus. The authorities of Kazakhstan also imposed quarantine in Nur-Sultan and Alma-Ata from March 19.