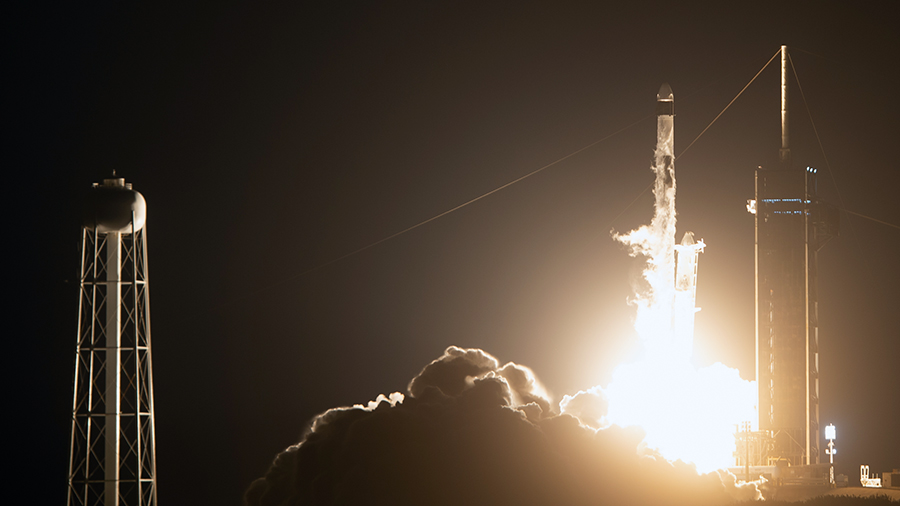 Four American and European astronauts are on their way to the International Space Station after their launch on a Crew Dragon spacecraft April 27, less than two days after another spacecraft returned from the station.

A SpaceX Falcon 9 lifted off from Launch Complex 39A at the Kennedy Space Center at 3:52 a.m. Eastern, placing the Crew Dragon spacecraft Freedom into orbit 12 minutes later. The rocket’s first stage, which launched three previous missions including Crew-3, landed on a droneship in the Atlantic.

The Crew-4 mission is commanded by NASA astronaut Kjell Lindgren with Bob Hines as pilot. NASA astronaut Jessica Watkins and European Space Agency astronaut Samantha Cristoforetti are mission specialists. The Crew Dragon is scheduled to dock with the ISS at 8:15 p.m. Eastern, a little more than 16 hours after liftoff.

Freedom will use the same ISS docking port that was occupied just a few days earlier by another Crew Dragon spacecraft, Endeavour, that spent more than two weeks at the station for the Ax-1 private astronaut mission. The spacecraft undocked April 24 and splashed down off the Florida coast April 25, less than 39 hours before the Crew-4 liftoff.

Both NASA and SpaceX officials said the short turnaround between the Ax-1 splashdown and Crew-4 launch was not an issue. “Engineers have been pouring over the data over the last 18 hours,” Steve Stich, NASA commercial crew program manager, said at a prelaunch briefing April 26 of reviews from the return of the Ax-1 mission. “It’s been a clean flight overall. No major issues.”

NASA and Roscosmos also worked to squeeze in the arrival of Crew-4 around a spacewalk by two Russian cosmonauts, Oleg Artemyev and Denis Matveev, scheduled for April 28. Joel Montalbano, NASA ISS program manager, said at the prelaunch briefing that the traditional welcome ceremony for the Crew-4 astronauts will take place several hours after their arrival because the Russian cosmonauts will be asleep at the time of docking to stay on schedule for their spacewalk.

NASA is planning a five-day handover between the new Crew-4 astronauts and the departing Crew-3 astronauts, who have been on the station since November 2021. Those four astronauts — NASA’s Raja Chari, Tom Marshburn, Kayla Barron and ESA’s Matthias Maurer — will depart in early May on the Crew Dragon spacecraft Endurance.

The Crew-4 astronauts will remain on the station until September. The Crew-5 mission, set to use the same spacecraft, Endurance, as Crew-3, will launch that month, with Crew-4 expected to return by mid-September, shortly before the launch of the Soyuz MS-22 spacecraft.

Editor’s Note: With the launch of Falcon rockets to supply the International Space Station, the dependence of the American Space Program on Roscosmos (Russian Space Agency) to launch Astronauts to the ISS has decreased and now US has the capability after the retiring of the space shuttle in 2011 to send astronauts and return them back from space once again.

You can watch the official NASA/SpaceX recording of the whole preparation and launch here at the link below: