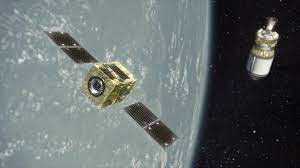 Astroscale said Feb. 17 it is preparing to resume an attempt to capture a satellite acting as a piece of debris in low Earth orbit, after pausing the demonstration three weeks ago to troubleshoot undisclosed problems.

The Japanese startup has started moving its 175-kilogram servicer spacecraft closer to the 17-kilogram client satellite ahead of deciding whether to restart the demonstration, Astroscale said in a social media post.

According to Astroscale, it has made “good progress in working through solutions to the anomalous spacecraft conditions that we identified with ELSA-d,” or End-of-Life Services by Astroscale-demonstration.

The company did not disclose the nature of the issue, when it could restart the mission, or the distance between the two objects.

The servicer and client were a few centimeters apart before a successful capture demonstration on Aug. 25 that was controlled manually by flight operators in the U.K.

They were separated by tens of meters at the start of a demonstration that was called off Jan. 26, when flight operators aimed to be less involved to enable the servicer to carry out the capture mission more autonomously.

The decision to maneuver the servicer into position for another capture attempt follows multiple discussions with regulators and insurers on the company’s next steps.

“The safety of ELSA-d, and of the orbital environment, remains our top priority,” Astroscale said in the Feb. 16 social media post.

“Both spacecraft are under control and being continually monitored, we are keeping regulators and key partners updated on our status, and we are moving forward with confidence.”

After performing a series of demonstrations designed to test the technology Astroscale plans to use to capture and remove objects in orbit, the servicer aims to deorbit the servicer and client in a controlled descent that it says will take seven to 10 years to complete.