Blue Origin expects to more than double the number of people it flies on its New Shepard suborbital system this year while adding another vehicle to its fleet.

In a presentation at the 24th Annual FAA Commercial Space Transportation Conference Feb. 17, Bob Smith, chief executive of Blue Origin, said the company saw “very robust” demand for those suborbital flights that the company is now working to meet. 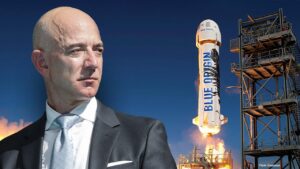 “The market is robust. It’s very robust. The challenge for Blue at this point is that we’re actually supply-limited. No business ever wants to be supply-limited when there’s robust demand,” he said. “It’s incumbent on us to go build new vehicles, get them ready and safely go fly, and also safely get our launch cadence up.”

After years of development and a series of uncrewed test flights, Blue Origin made its first crewed New Shepard flight in July 2021, followed by launches in October and December. Those three flights carried 14 people: four each on the first two flights and a full complement of six people on the December launch.

Smith said later that he expects Blue Origin to “easily double” the number of people it flies this year. He declined in a later interview to say how many New Shepard flights, which would include both crewed and payload-only missions, the company has scheduled for this year but said the crewed flights will carry six people each.

That increase in launches will be enabled in part by a new vehicle that he said the company expects to bring into service this year. It will also require a faster turnaround of vehicles between flights. “That’s the one that we have to be thoughtful about because that’s the place where spaceflight has gotten into trouble,” he said. “We’ve spent a lot of time thinking through how, methodically, to check out a reusable launch system.”

The vehicles were “very clean” after each of those three crewed flights, he said. “Our launch rate is really going to be paced on how much we can convince ourselves that we can take out process and do it well.”

The demand the company sees is based on an auction is conducted last year for a seat on the first crewed flight. The winning bid was $28 million from a Chinese cryptocurrency entrepreneur, Justin Lin, who was unable to go on that flight. In December he announced he instead was buying a dedicated New Shepard flight scheduled for the fourth quarter of 2022.

Blue Origin donated the winning bid to charities, but the company got something else out of the auction. “How do you go to market? How do you establish pricing? How do you actually get demand?” Smith said. “That’s why we ran the auction.”

The auction ensured not only a high price for that first ticket but also a base of future customers and knowledge of their price sensitivities. “Now we have a great understanding of not only, by name, people and what they would pay, but also the volume of people,” he said. “We can see what that curve is from higher prices down to lower prices in terms of volume.”

“We’ve learned a lot of interesting things about the market over the past year,” said Audrey Powers, vice president of New Shepard flight and mission operations at Blue Origin who also flew on the vehicle in October.

She said at the conference that, anecdotally, there seemed to be strong interest in flying on New Shepard even from people who had never considered going to space. “I’ve had so many people coming to me and saying, ‘I would do that in a minute.,’” she said. “There are people whose interests have been sparked by what we did last year.”

Blue Origin’s approach to the market is vastly different from the other leading suborbital space tourism company, Virgin Galactic, which sold tickets at fixed prices. Virgin officially restarted ticket sales to the general public Feb. 16 at a price of $450,000. The company had restarted ticket sales in August 2021 to those who had paid a $1,000 deposit to join its “One Small Step” program and said in November it sold about 100 tickets.

Virgin Galactic’s SpaceShipTwo suborbital spaceplane has not flown since a July launch that carried the company’s founder, Richard Branson, among others. Both the spaceplane and its WhiteKnightTwo carrier aircraft are in an extended maintenance period that will last for much of this year.

In a Feb. 15 statement about those ticket sales, Michael Colglazier, chief executive of Virgin Galactic, said the company has a goal of having 1,000 customers when it starts commercial flights “later this year.” As of November 2021, the company had about 700 customers.

During a later panel discussion at the FAA conference on Feb. 17, Scott McLaughlin, executive director of Spaceport America in New Mexico, said he expected Virgin Galactic to return WhiteKnightTwo to the spaceport this summer after completing maintenance work in Mojave, California, bringing with it a second suborbital spaceplane. “They want to start operations sometime in 2023,” he said, “and what they’ve announced is something on the order of three times a month to get started.”