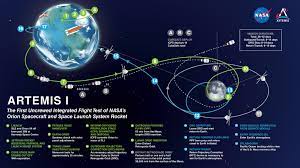 With the rocket now on the launchpad, the Artemis I Moon mission is getting real: 29 August is the first opportunity for the SLS rocket to blast off from NASA’s Kennedy Space Center’s launchpad 39B in Florida, USA.

This first Artemis mission will put NASA’s Orion spacecraft and its European Service Module to the test during a journey beyond the Moon and back. The spacecraft will enter lunar orbit, using the Moon’s gravity to gain speed and propel itself almost half a million km from Earth – farther than any human-rated spacecraft has ever traveled.

This journey will serve as a test of both the Orion spacecraft and its SLS rocket ahead of crewed flights to the Moon. In this instance, no crew will be on board Orion, and the spacecraft will be controlled by teams here on Earth. The second Artemis mission, however, will see four astronauts travel around the Moon on a flyby voyage around our natural satellite.

The uncrewed Artemis I will launch on a mission that goes beyond the moon and returns to Earth. Once it launches, the spacecraft will reach a distant retrograde orbit around the moon, traveling 1.3 million miles (2.1 million kilometers) over the course of 42 days. Artemis I will splash down in the Pacific Ocean off the coast of San Diego on October 10. Orion’s return will be faster and hotter than any spacecraft has ever experienced on its way back to Earth.

The Orion spacecraft will travel farther than any spacecraft built for humans has ever flown, reaching 40,000 miles (64,000 kilometers) beyond the far side of the moon, according to NASA.

TagsArtemis 1 Mission Back to the Moon NASA

How is NASA Going Back to the Moon with the Artemis Mission?
Star Trek Creator Gene Roddenbery and Actors Scotty and Uhura’s Ashes will be Flown to Deep Space in a Vulcan Rocket
Comment