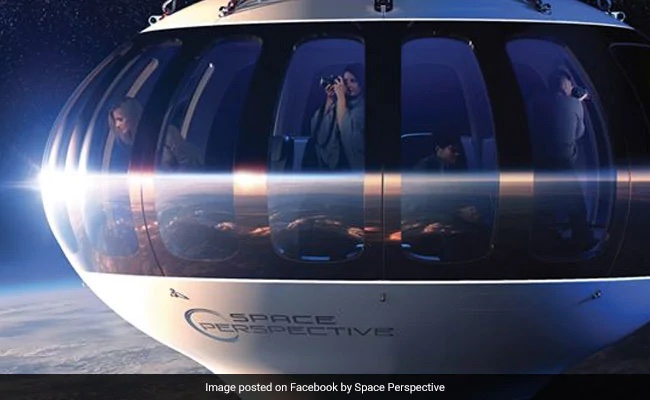 The future of space tourism may look nothing like the sterile, utilitarian white rooms imagined in the sci-fi staples we grew up with. Instead, it could be comfortable, familiar, and focused on fostering human connection and empathy, according to Space Perspective cofounder, co-CEO, and CTO Taber McCollum. 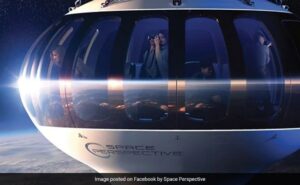 Space Perspective: The space-tourism-via-balloon startup aims to capture the essence and experience astronauts have of spaceflight. “When you talk with astronauts about their experience, they don’t talk about the microgravity, the rocket ride…what they talk about is hours spent at the window looking at the Earth below,” said McCollum.
“That’s the quintessential experience.”
Space Perspective is developing a passenger capsule that will carry eight passengers and a pilot to a ~100,000ft suborbital altitude, ascending over two hours, floating for at least two hours, and descending over two hours for a minimum 6-hour journey that could be extended to as long as a full day. At the end of the flight, the capsule will splash down in the ocean.
Flying in Luxury
Today, Space Perspective unveiled the interior design of Spaceship Neptune, its passenger capsule. The space is designed with comfort and human connection in mind, looking more like a high-end lounge with a cocktail bar and panoramic windows than a space station.
The design philosophy: “We don’t want people to get nervous as they see the Earth fading below them,” said McCollum. “We want people to enjoy it. We want people to have a way to maybe look away if it’s getting too much.”
The design uses muted colors to reduce any glare on the windows, which will provide a panoramic, 360-degree view of planet Blue.
Tickets are $125,000 per head. The startup has already sold ~600 tickets, and McCollum says the demand has come from across age groups, not just the retired folks he originally envisioned as the target customer.
“That market is certainly there,” he said. “But we’re seeing across the board, a range of, you know, millennials who think this is an important experience, people who just want to have a good time with their friends.”
To fund development, Space Perspective has raised $48M to date.
Balloons vs. rockets? The two ways of getting to suborbital space each have their benefits and drawbacks, McCollum said. A balloon flight won’t give you the thrill or the feeling of weightlessness you get from something like Blue Origin’s tourist flights, but a balloon gives you a longer-lasting experience and gentler ride.
McCollum emphasized that the balloon flight will be especially safe for passengers since it never has to transition flight modes from the balloons to aerodynamic flight to a parachute landing—it’s just the balloon gliding all the way down. “Whenever you transition from one mode to another, there’s a risk,” McCollum said.
In the works: Space Perspective is in the designing and building stage right now. The company plans to begin test flights later this year and is targeting 2024 for its first commercial flights.

World View is a Tucson, AZ-based remote-sensing and space tourism stratospheric balloon developer. The startup is on a publicity blitz, making waves recently at SXSW in Austin, appearing on The Today Show, and naming actor Adrian Grenier as “chief earth advocate.”
We caught up with CEO Ryan Hartman to hear more about World View’s roadmap.

The 100,000-ft. view
The company is in the business of “stratospheric exploration,” Hartman said, split among the dual business lines of hoisting 1) payloads and 2) people.
For 7+ years, World View has leveraged its balloon stack to observe Earth for scientific organizations, governments, and companies. Hartman said the stratospheric sensor set enables 45 days of persistent coverage at “very high resolutions.”
“We were doing well in the remote-sensing side of the business,” Hartman said, “but I started looking at space tourism…and recognizing that there was something unique we could offer.”
The consumer-facing side of the business is set to launch in 2024, via a 10,000-lb. pressurized capsule and football stadium-sized balloon.
What goes into Balloon UX?
Safety-first design. “This is the safest way to experience viewing the Earth from the darkness of space, seeing the curvature of the Earth,” Hartmain said.
Zero-pressure balloons. The World View team has “taken the time to learn how to scale” its stratospheric platform to the size needed for both sensing and space tourism.
Optimize around 1) windows and 2) time. You want customers to experience the Overview Effect as seamlessly as possible, but you also don’t treat interior comfort on the multi-hour journey as an afterthought.
World View plans to launch from bespoke spaceports at the Grand Canyon, the Great Barrier Reef, Serengeti, Aurora Borealis, Amazonia, the Giza Pyramids, and the Great Wall of China (in that order).
Other considerations
On customer demand: Ticket sales (starting at $50,000) are exceeding Hartman’s expectations. He wouldn’t share hard numbers, but World View plans to do so in the not too distant future.
At scale: Operating efficiencies could afford the startup some flexibility around pricing, but the startup also may try to eventually upsell packages around specific, unpredictable “flying seasons” and celestial events like solar eclipses.
Costs: Lift gas—ie, helium—is World View’s largest variable cost. On the B2B/B2G side, sensors and the team needed to support 45-day journeys are also sizable cost drivers. While tourism and sensing are “completely different businesses,” Hartman said the bottom line of both will be boosted by balloons designed for significant reusability, duration, and flight efficiency.
Use cases: World View has imagined weddings and summits taking place on its balloons, art (and yes, NFTs) being made, and various types of new research being conducted. Most importantly, though, there’s “all of the other things that I’m not creative enough to think about,” Hartman said.
Closing thoughts…”We have to have a very healthy space program, globally [and] not just in the US…to understand our planet and become better stewards of our planet as well.”