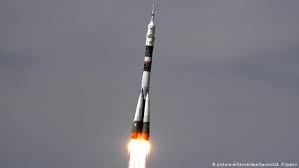 The manufacturer of Russia’s workhorse Soyuz-2 rocket said it has paused production to keep factory workers safe during the coronavirus pandemic.

In a transcript released by the Kremlin April 10, Dmitry Baranov, general director of the Samara Space Center, said the company has 52 Soyuz rockets already built — 40 in storage and 12 at spaceports awaiting missions. Russia uses Soyuz-2 rockets to launch crews and cargo to the International Space Station and to put up government satellites. European launch provider Arianespace also uses the Russian-built Soyuz-2 for satellite launches.

Baranov did not mention any impact from the bankruptcy of megaconstellation startup OneWeb, for which Arianespace had completed three of a planned 21 Soyuz launches under a $1.1 billion contract. Arianespace had stressed for the past two years that it had Soyuz rockets ready for OneWeb whenever the startup had satellites available to launch, and had anticipated conducting 10 Soyuz launches for OneWeb this year.

Baranov said Samara continues to test and maintain already built Soyuz-2 rockets because it views those as critical activities. Work related to Russian defense ministry programs and development of the next-generation Soyuz-5 rocket is also ongoing, he said.

Samara has a state contract to build and launch the first Soyuz-5, whose design leans heavily on the existing Zenit-3 and Soyuz-2 rockets, by the end of 2022, he said.

Baranov said Samara is considering restoring its full workforce after April 20, while observing safety measures to prevent spreading the coronavirus.

Russia builds an average of 15 to 20 Soyuz rockets per year, according to Arianespace.

A Soyuz launch of a Progress cargo ship is still planned for late April from the Baikonur Cosmodrome in Kazakhstan, Baranov said.