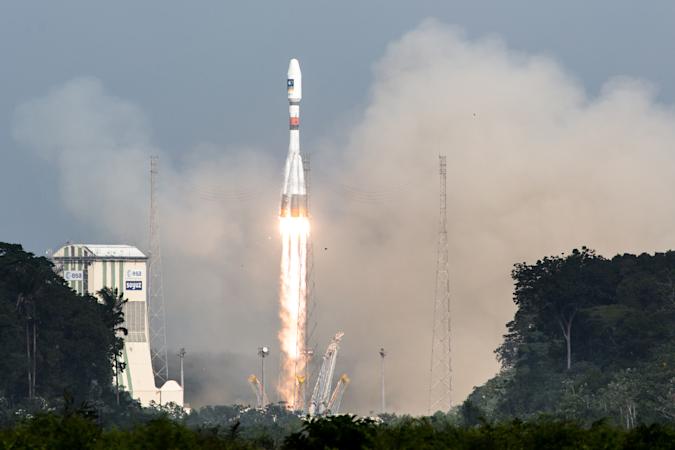 Russian Space Agency Roscosmos announced on Feb. 26 that it is halting cooperation with Europe on Soyuz launches from French Guiana and withdrawing its personnel from the launch site in response to European sanctions for Russia’s invasion of Ukraine. 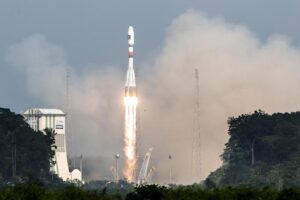 “In response to EU sanctions against our enterprises, Roscosmos is suspending cooperation with European partners in organizing space launches” from French Guiana, Roscosmos said in a pair of tweets, citing a statement by its head, Dmitry Rogozin. The agency said it will withdraw the 87 employees of several Russian companies that support Soyuz launches there, although the details of that withdrawal are “being worked out.

The announcement will, at a minimum, delay a Soyuz launch of two Galileo navigation satellites that had been scheduled for April from French Guiana, with another pair of Galileo satellites scheduled to launch later in the year on another Soyuz. The European Space Agency planned to launch its EarthCARE Earth science mission, developed in cooperation with the Japanese space agency JAXA, on a Soyuz in 2023, along with the Euclid infrared space telescope. The French government was also expected to launch its CSO-3 reconnaissance satellite on a Soyuz in early 2023.

An ESA spokesperson stated on Feb. 26 that the agency had no immediate comment on the Roscosmos announcement. An “internal crisis coordination meeting” is scheduled for Feb. 28, after which ESA may issue a statement. Arianespace, which offers the Soyuz for commercial launches from French Guiana and other spaceports, did not immediately respond to a request for comment.

Thierry Breton, the European Union commissioner whose portfolio includes space, said in a Feb. 26 statement that the decision has no immediate effects on the “continuity and quality” of the Galileo system or on the Copernicus series of Earth science spacecraft. “We will take all relevant decisions in response to this decision in due course and continue developing resolutely the second generation of these two E.U. sovereign space infrastructures,” he said.

The decision to suspend Soyuz launches from French Guiana is one of the few levers on space-related issues that Russia can pull to react to Western sanctions without jeopardizing its own space capabilities, such as operations of the International Space Station. Western dependence on Russian space systems and technologies has declined significantly since Russia’s 2014 annexation of Crimea, when Russia threatened to cut off access to seats on Soyuz spacecraft flying to the ISS and halt exports of the RD-180 engines used on the Atlas 5 in response to U.S. sanctions.

Roscosmos also announced via a tweet that Rogozin concluded that it was “inappropriate” for the U.S. to continue cooperation with Russia on the proposed Venera-D mission to Venus. That move is largely a ceremonial one because, while there have been discussions between American and Russian scientists on a potential role for NASA on Venera-D, the mission itself has suffered extensive delays and is unlikely to launch before the end of the decade, if at all.