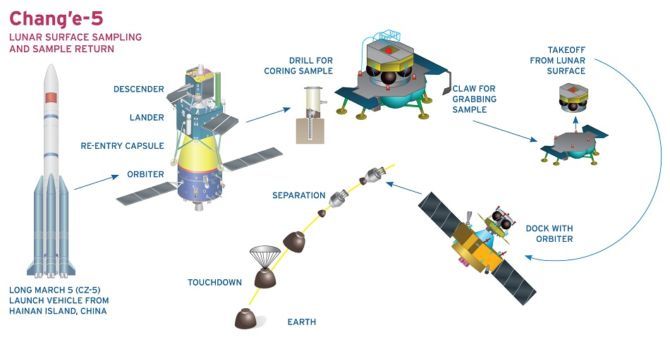 China successfully launched its Chang’e-5 lunar mission Tuesday to collect rocks from the moon — the first attempt by any country since the 1970s.

The unmanned Chang’e-5 probe, named after the mythical Chinese goddess of the moon, blasted off from the Wenchang Spacecraft Launch Site in Hainan, near the country’s southern tip, in the early morning.
After liftoff, the spacecraft separated from its boosters and protective fairing, and went into Earth-moon transfer orbit. Live-streamed footage from the launch shows the Chinese teams and engineers applauding in the control room when the boosters fell away from each side of the rocket, and again when the spacecraft separated from the rocket in orbit.
Once in the moon’s orbit, the probe will deploy a pair of vehicles to the surface to drill into the ground and collect soil and rock samples. If successful, the mission will make China only the third country to have retrieved lunar samples, following the United States and the Soviet Union decades ago. 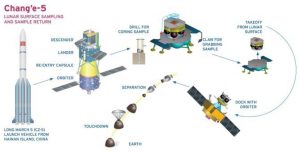 The Chang’e-5 probe will attempt to collect 2 kilograms (4.5 pounds) of samples in a previously unvisited area of the moon — a massive lava plain known as Oceanus Procellarum, or “Ocean of Storms.” According to NASA, this large dark spot, stretching about 2,900 kilometers (1,800 miles) wide, could be a scar from a giant cosmic impact that created an ancient sea of magma.
These samples could help scientists understand more about the moon’s origins and foundations — and set the foundation for more complex sample retrieval missions in the future, potentially on other planets.
Tagschange mission chinese lunar mission lunar mission lunar sampling mission mission to the moon