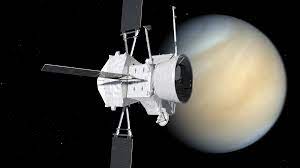 Venus has been an important planet that has been the focus of scientists and science fiction writers alike. Understanding the hellish atmosphere of Venus including the hot temperatures and the incessant, powerful lightning in the Venusian atmosphere would go a long way into understanding our solar system and its creation. There may also be signs of life in Venus so perhaps the question of is there life on venus can be answered with more probes and examinations of the planet. Bepiolombo interplanetary probe has helped to shed light on these questions.

BepiColombo, a joint mission by the European Space Agency (ESA) and the Japan Aerospace Exploration Agency (JAXA), recorded the audio with its magnetometer instrument, providing a rare glimpse into the interaction between the stream of charged particles flowing from the sun, known as solar wind, and the thick carbon dioxide-rich atmosphere of Earth’s closest planetary neighbor.

The Mercury-bound BepiColombo spacecraft listened to the sound of the solar wind at Venus as it flew just 340 miles (550 kilometres) above the planet’s surface during a manoeuvre designed to adjust its path.

The audio is not the actual sound that could be heard in space but a so-called sonification, a translation of data into sounds, ESA said in a statement.

“This was the first time we could obtain such multi-dimensional measurements of the environment around Venus,” Johannes Benkhoff, ESA BepiColombo project scientist, told Space.com. “That could enable us to see, for example, how the solar wind interacts with the planet and its atmosphere and how fast the processes are.”