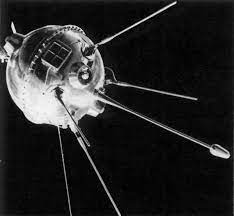 The Luna moon mission program (from the Russian word Луна “Luna” meaning “Lunar” or “Moon”), occasionally called Lunik by western media, was a series of robotic spacecraft missions sent to the Moon by the Soviet Union between 1959 and 1976. Fifteen were successful, each designed as either an orbiter or lander, and accomplished many firsts in space exploration. They also performed many experiments, studying the Moon’s chemical composition, gravity, temperature, and radiation.

Luna 1 (launched Jan. 2, 1959) was the first spacecraft to escape Earth’s gravity. It failed to impact the Moon as planned and became the first man-made object to go into orbit around the Sun. Luna 2 (launched Sept. 12, 1959) was the first spacecraft to strike the Moon, and Luna 3 (Oct. 4, 1959) made the first circumnavigation of the Moon and returned the first photographs of its far side. Luna 9 (Jan. 31, 1966) made the first successful lunar soft landing. Luna 16 (Sept. 12, 1970) was the first unmanned spacecraft to carry lunar soil samples back to Earth. Luna 17 (Nov. 10, 1970) soft-landed a robot vehicle, Lunokhod 1, for exploration. It also contained television equipment, by means of which it transmitted live pictures of several kilometres of the Moon’s surface. Luna 22 (May 29, 1974) orbited the Moon 2,842 times while conducting space research in its vicinity. Luna 24 (Aug. 9, 1976) returned with lunar soil samples taken from a depth of seven feet (about two metres) below the surface.

Seventeen of the 45 Luna missions were successful.

A few Luna missions won key victories in the space race between the United States and the former Soviet Union. Luna spacecraft were the first to impact and make a survivable landing on the Moon, photograph the far side of the Moon (never before seen by humans) and orbit the Moon.