Despite an array of problems, the first space station, Salyut 1, made important progress toward living and working in space long-term and paved the way for future space stations. Launched by the Soviet Union in 1971, the port orbited the Earth almost 3,000 times during its 175 days in space before it was intentionally crashed into the Pacific Ocean.

Shaped like a cylinder, Salyut 1 bore three pressurized compartments for astronauts and one unpressurized area containing the engines and control equipment. The station was about 65 feet (20 meters) long and 13 feet (4 meters) in diameter at its widest point. Two double sets of solar panels extended like wings on the exterior of the compartments at either end.

Salyut 1 launched unmanned from the Soviet Union on April 19, 1971.  Two days later, Soyuz 10 lifted off, carrying a crew of three toward the space station with the intention of remaining in space for 30 days. The cosmonauts attempted to dock with Salyut 1, but although they were able to lock onto the station, a problem with the hatch kept them from being able to enter it. They returned home early and unsuccessful. During the re-entry process, a problem rendered the air supply of Soyuz 10 toxic, and one of the cosmonauts slipped into unconsciousness. All three survived with no long-term effects.

On June 6, Soyuz 11 transported cosmonauts Georgi Dobrovolski, Vladislav Vokov, and Viktor Patsayev to Salyut 1, where after three hours, they successfully docked with the station. They remained on board for 383 orbits in the course of just over three weeks, setting a new space endurance record. On June 16, smoke from a control panel caused the crew to consider abandoning the station, but the unit was switched off and the problem averted.

On October 11, 1971, the engines on Salyut 1 fired for the last time, bringing the space station into a lower orbit that would result in its eventual plunge into the Pacific Ocean. But despite its early death, Salyut 1 set the stage for stations to come after. The Soviets continued to put short-term stations into space for several years until they felt they were ready for a long-term project. 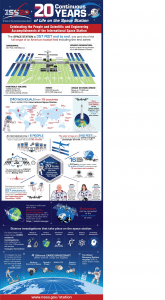