Europa is one of Jupiter’s moons and it is also most probably the most important moon in the Jovian system as well as perhaps the most important natural body in the Solar System. Since decades ago science fiction writers have depicted Europa as a place which can harbor life and the oceans of Europa point that life may have existed on this moon of Jupiter. 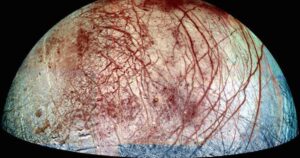 Slightly smaller than the Earth’s Moon, Europa’s water-ice surface is crisscrossed by long, linear fractures, cracks, ridges, and bands. The moon’s ice shell is probably 10 to 15 miles (15 to 25 kilometers) thick, beneath which the ocean is estimated to be 40 to 100 miles (60 to 150 kilometers) deep. Like Earth, Europa is thought to also contain a rocky mantle and iron core.

Europa is named for a woman who, in Greek mythology, was abducted by the god Zeus — Jupiter in Roman mythology.

Decades ago, science fiction offered a hypothetical scenario: What if alien life were thriving in an ocean beneath the icy surface of Jupiter’s moon Europa? The notion pulled Europa out of obscurity and into the limelight where it has remained, stoking the imaginations of people both within and outside the science community who fantasize about humans discovering life beyond Earth. That fantasy, however, may be grounded in reality.

From ground-based telescopes, scientists knew that Europa’s surface is mostly water ice, and scientists have found strong evidence that beneath the ice crust is an ocean of liquid water or slushy ice. In 1979 the two Voyager spacecraft passed through the Jovian system, providing the first hints that Europa might contain liquid water. Then ground-based telescopes on Earth, along with the Galileo spacecraft and space telescopes, have increased scientists’ confidence for a Europan ocean.

Scientists think Europa’s ice shell is 10 to 15 miles (15 to 25 kilometers) thick, floating on an ocean 40 to 100 miles (60 to 150 kilometers) deep. So while Europa is only one-fourth the diameter of Earth, its ocean may contain twice as much water as all of Earth’s oceans combined. Europa’s vast and unfathomably deep ocean is widely considered the most promising place to look for life beyond Earth. A passing spacecraft might even be able to sample Europa’s ocean without landing on the moon’s surface because it is possible that Europa’s ocean may be leaking out into space.

Life as we know it seems to have three main requirements: liquid water, the appropriate chemical elements, and an energy source.

Astrobiologists — scientists who study the origin, evolution and future of life in the universe — believe Europa has abundant water and the right chemical elements, but an energy source on Europa has been difficult to confirm. On Earth, life forms have been found thriving near subterranean volcanoes, deep-sea vents and other extreme environments. These “extremophile” life forms give scientists clues about how life may be able to survive beneath Europa’s ice shell.

With an equatorial diameter of 1,940 miles (3,100 kilometers), Europa is about 90 percent the size of Earth’s Moon. So if we replaced our Moon with Europa, it would appear roughly the same size in the sky as our Moon does, but brighter — much, much brighter. Europa’s surface is made of water ice and so it reflects 5.5 times the sunlight than our Moon does.

How far is Europa? Europa orbits Jupiter at about 417,000 miles (671,000 kilometers) from the planet, which itself orbits the Sun at a distance of roughly 500 million miles (780 million kilometers), or 5.2 astronomical units (AU). One AU is the distance from Earth to the Sun. Light from the Sun takes about 45 minutes to reach Europa. Because of the distance, sunlight is about 25 times fainter at Jupiter and Europa than at Earth.

Europa orbits Jupiter every 3.5 days and is locked by gravity to Jupiter, so the same hemisphere of the moon always faces the planet. Jupiter takes about 4,333 Earth days (or about 12 Earth years) to orbit the Sun (a Jovian year). Jupiter’s equator (and the orbital plane of its moons) are tilted with respect to Jupiter’s orbital path around the Sun by only 3 degrees (Earth is tilted 23.5 degrees). This means Jupiter spins nearly upright so that the planet, as well as Europa and Jupiter’s other dozens of moons, do not have seasons as extreme as other planets do.

You can watch the flyover video of Europa in this video below:

Because Europa’s orbit is elliptical (slightly stretched out from circular), its distance from Jupiter varies, and the moon’s near side feels Jupiter’s gravity more strongly than its far side. The magnitude of this difference changes as Europa orbits, creating tides that stretch and relax the moon’s surface.

Flexing from the tides likely creates the moon’s surface fractures. If Europa’s ocean exists, the tidal heating could also lead to volcanic or hydrothermal activity on the seafloor, supplying nutrients that could make the ocean suitable for living things.

Like our planet, Europa is thought to have an iron core, a rocky mantle and an ocean of salty water. Unlike Earth, however, Europa’s ocean lies below a shell of ice probably 10 to 15 miles (15 to 25 kilometers) thick and has an estimated depth of 40 to 100 miles (60 to 150 kilometers). While evidence for an internal ocean is strong, its presence awaits confirmation by a future mission.

Jupiter’s large Galilean satellites (Io, Europa, Ganymede, and Callisto) likely formed out of leftover material after Jupiter condensed from the initial cloud of gas and dust surrounding the sun, early in the history of the solar system. Those four moons are likely about the same age as the rest of the solar system — about 4.5 billion years old.

Distance from Jupiter also determines how much tidal heating the Galilean satellites experience — Io, closest to Jupiter, is heated so much that it is the most volcanically active body in the solar system, and it likely long ago drove off any water it had when it formed. Europa has a layer of ice and water on top of a rocky and metal interior, while Ganymede and Callisto actually have higher proportions of water ice and so lower densities.

Europa’s water-ice surface is crisscrossed by long, linear fractures. Based on the small number of observable craters, the surface of this moon appears to be no more than 40 to 90 million years old, which is youthful in geologic terms (the surface of Callisto, another of Jupiter’s moons, is estimated to be a few billion years old). Along Europa’s many fractures, and in splotchy patterns across its surface, is a reddish-brown material whose composition is not known for certain, but likely contains salts and sulfur compounds that have been mixed with the water ice and modified by radiation. This surface composition may hold clues to the moon’s potential as a habitable world.

NASA’s Galileo spacecraft explored the Jupiter system from 1995 to 2003 and made numerous flybys of Europa. Galileo revealed strange pits and domes that suggest Europa’s ice layer could be slowly churning, or convecting (cooler, denser ice sinks, while warmer less-dense ice rises) due to heat from below. Long, linear fractures are often only 1-2 kilometers wide but can extend for thousands of kilometers across Europa’s surface. Some of these fractures have built up into ridges hundreds of meters tall, while others appear to have pulled apart into wide bands of multiple parallel fractures. Galileo also found regions called “chaos terrain,” where broken, blocky landscapes were covered in mysterious reddish material. In 2011, scientists studying Galileo data proposed that chaos terrains could be places where the surface collapsed above lens-shaped lakes embedded within the ice.

Europa has only a tenuous atmosphere of oxygen, but in 2013, NASA announced that researchers using the Hubble Space Telescope found evidence that Europa might be actively venting water into space. This would mean the moon is geologically active in the present day. If confirmed by follow-up observations, the plumes of water could be studied by future spacecraft similar to how the Cassini sampled the plume of Saturn’s moon Enceladus.

One of the most important measurements made by the Galileo mission showed how Jupiter’s magnetic field was disrupted in the space around Europa. The measurement strongly implied that a special type of magnetic field is being created (induced) within Europa by a deep layer of some electrically conductive fluid beneath the surface. Based on Europa’s icy composition, scientists think the most likely material to create this magnetic signature is a global ocean of salty water, and this magnetic field result is still the best evidence we have for the existence of an ocean on Europa.

EUROPA is an ocean world.