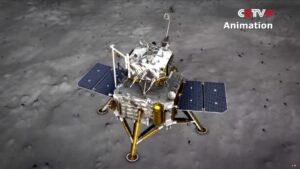 The Chang’e-5 orbiter module which facilitated China’s complex lunar sample return last year is on its way to the moon following deep-space tests.

The orbiter, one of four distinct Chang’e-5 mission spacecraft, delivered a return module containing 1.731 kilograms of lunar samples to Earth Dec. 16 before firing its engines to deep space for an extended mission. This was one of the most important lunar missions in Lunar History as it was the first return of a lunar sample after the 1970s.

The Chang’e-5 orbiter later successfully entered an intended orbit around Sun-Earth Lagrange point 1, roughly 1.5 million kilometers, in March. There it carried out tests related to orbit control and observations of the Earth and Sun.

New data from satellite trackers now suggests Chang’e-5 has left its orbit around Sun-Earth L1 and is destined for a lunar flyby early September 9 Eastern time. It was noted that Chang’e-5 may have altered its orbit Aug. 30 based on observations by and data from amateur satellite trackers Daniel Estevez and Scott Tilley and independent astronomy software developer Bill Gray.

The spacecraft is under the control of the Beijing Aerospace Flight Control Center (BACC), which is responsible for telemetry, tracking and command of spacecraft. BACC has not yet provided an update on the plans for Chang’e-5.

Potential maneuvers such as entering lunar orbit, heading for another Sun-Earth Lagrange point or an Earth-moon Lagrange point depend on how much propellant the orbiter has remaining. Another possibility could be using the flyby to set Chang’e-5 on a trajectory to flyby 469219 Kamoʻoalewa, a quasi-satellite of Earth and the target for China’s 2024 near-Earth asteroid sample-return mission.