Sputnik I Satellite – The Space Launch to Start the Space Age 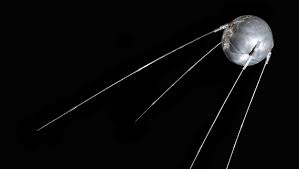 Sputnik 1, the first artificial satellite launched on October 4, 1957, was a 83.6-kg (184-pound) capsule. It achieved an Earth orbit with an apogee (farthest point from Earth) of 940 km (584 miles) and a perigee (nearest point) of 230 km (143 miles), circling Earth every 96 minutes and remaining in orbit until January 4, 1958, when it fell back and burned in Earth’s atmosphere. The launch of Sputnik 1 shocked many Americans, who had assumed that their country was technologically ahead of the Soviet Union, and led to the “space race” between the two countries. The word SPutnik means “Traveling Companion” in Russian.

Soviet space officials had wanted the nation’s first satellite to be much bigger than a beach ball. The original plan called for lofting a nearly 3,000-lb. (1,400 kg) craft outfitted with a variety of scientific instruments.

But development of this satellite, code-named “Object D,” progressed more slowly than expected, and Soviet officials grew increasingly worried that the United States might beat them to space. So, they decided to precede the launch of Object D with a “simplest satellite,” or “prosteishy sputnik” in Russian. Indeed, Sputnik 1 was also known as PS-1. Sputnik 1 carried no scientific instruments. However, researchers did learn some things about Earth’s atmosphere by studying the beep-beep-beep radio signals emitted by the satellite.

Sputnik 1 was powered by three silver-zinc batteries, which were designed to operate for two weeks. The batteries exceeded expectations, as the satellite continued sending out its radio signal for 22 days.

The spacecraft continued lapping Earth in silence for a few more months, its orbit decaying and sending the craft steadily closer to the planet. The satellite finally burned up in the atmosphere on Jan. 4, 1958.