The Lunar Gateway, or simply the Gateway, is a planned small space station in lunar orbit intended to serve as a solar-powered communication hub, science laboratory, short-term habitation module, and holding area for rovers and other robots. It is expected to play a major role in NASA’s Artemis program, after 2024. While the project is led by NASA, the Gateway is meant to be developed, serviced, and utilized in collaboration with commercial and international partners: Canada (CSA), Europe (ESA), and Japan (JAXA). It will serve as the staging point for both robotic and crewed exploration of the lunar south pole, and is the proposed staging point for NASA’s Deep Space Transport concept for transport to Mars.Formerly known as the Deep Space Gateway (DSG), the station was renamed Lunar Orbital Platform-Gateway (LOP-G) in NASA’s 2018 proposal for the 2019 United States federal budget. 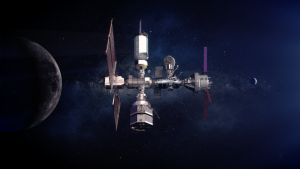 The Gateway will be an outpost orbiting the Moon that provides vital support for a sustainable, long-term human return to the lunar surface, as well as a staging point for deep space exploration. It is a critical component of NASA’s Artemis program.

The Gateway is a vital part of NASA’s deep space exploration plans, along with the Space Launch System (SLS) rocket, Orion spacecraft, and human landing system that will send astronauts to the Moon. Gaining new experiences on and around the Moon will prepare NASA to send the first humans to Mars in the coming years, and the Gateway will play a vital role in this process. It is a destination for astronaut expeditions and science investigations, as well as a port for deep space transportation such as landers en route to the lunar surface or spacecraft embarking to destinations beyond the Moon.

NASA has focused Gateway development on the initial critical elements required to support the 2024 landing – the Power and Propulsion Element, the Habitation and Logistics Outpost (HALO) and logistics capabilities.