Virgin Galactic prepares for its first spaceflight from New Mexico 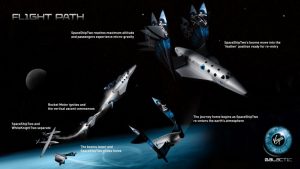 Virgin Galactic announced Dec. 1 that is had rescheduled a powered test flight of its SpaceShipTwo suborbital spaceplane for a window that opens Dec. 11 from Spaceport America in New Mexico. Pilots CJ Sturckow and David Mackay will fly the vehicle on a trajectory that will go above the 80-kilometer altitude that the company defines as space, based on the altitude U.S. government agencies use for awarding astronaut wings. The vehicle will then glide to a landing at the spaceport.

Virgin Galactic said it would proceed with the test flight using only “essential personnel” at the spaceport. “Only essential staff will be on-site to support the preflight operations ahead of the flight and the day of the flight,” the company said in a statement, adding that there will be no guests or media at the spaceport to witness the flight.

“In accordance with local government guidelines and safety protocols, we have minimized the number of people on-site to the greatest degree possible,” Michael Colglazier, chief executive of Virgin Galactic, said in the company statement.

It was unclear if the company will provide a live broadcast of the flight. Colglazier said the company “will endeavor to capture and share the beautiful images with the world after the flight has been completed.”

That approach has the approval of the state government. “This is an exciting announcement that demonstrates we have gotten back on track in a safe and speedy manner,” the state’s governor, Michelle Lujan Grisham, said in that statement.

If the flight does go beyond the 80-kilometer altitude, it will make New Mexico only the third state to host a crewed spaceflight, after Florida and California. It will also mark the realization of an effort that started 15 years ago, when then-Gov. Bill Richardson and Virgin Galactic founder Richard Branson announced a partnership that would lead to the development of the state-funded spaceport.

“For all us in the state of New Mexico, we always interpreted these early flights to be big events with big crowds,” said Scott McLaughlin, interim executive director of Spaceport America, during a Dec. 2 meeting of the board of the New Mexico Spaceport Authority. “Because of COVID, though, we have to focus down and look at these more as test flights.”

He said the spaceport was working to inform the public that the spaceport is closed to all but essential personnel, and has also done tabletop exercises with law enforcement agencies to plan for the event. “We don’t know if there will be a crowd or not,” he said. “We’re trying to make sure people know that it’s not a good idea.”

When Mackay and Sturckow do fly, they will do so in a new uniform. The company unveiled Dec. 4 a new flight suit for its pilots, designed by Under Armour, the athletic apparel company that also designed the suits Virgin’s customers will wear. The new suits are in the same shade of blue as the customer suits with black accents, replacing the black suits that the pilots previously wore.

“I’m very much looking forward to wearing my own spacesuit during New Mexico’s first human spaceflight later this month,” said Mackay, who is also Virgin Galactic’s chief pilot, in a statement, “and then many times in the future as we share the wonder of space with our future astronauts.”