On April 9, 1959, NASA introduced its very first astronaut class. This dashing group of young men is known as the Mercury 7. 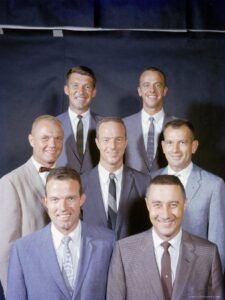 They were all military test pilots before they were chosen for the job, and they had all “the right stuff” to take on such risky missions. But in a way, they essentially became guinea pigs for NASA’s new human spaceflight program, because they didn’t get to do much piloting inside the Mercury spacecraft.
Some of the pilots weren’t too happy about this. But the rest of the country paid no attention to that, and the Mercury 7 instantly became national heroes. In 1961, Alan Shepard became the first American to fly to space, followed by Gus Grissom. Then in 1962, John Glenn became the first American to orbit the Earth.

After that, Scott Carpenter, Wally Schirra and Gordon Cooper all completed orbital missions as well. Deke Slayton, the only Mercury 7 astronaut not to fly a Mercury mission, later flew on the historic Apollo-Soyuz mission, the first joint flight by two countries: the United States and Soviet Unio