Can Asteroids be Mined for Space Mining? 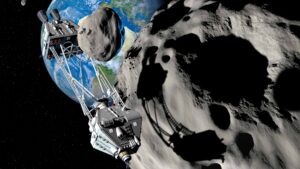 As the resources on Earth dwindle, the need for natural resources grows exponentially. Naturally, people look out toward space to fill these needs. Many scientists agree that asteroids contain all sorts of valuable minerals and natural resources including gold, iron, nickel, aluminium as well as some trace elements used in microelectronics. It would be prudent to be able to mine these resources for the benefit of mankind. Hence, space mining may become more important then ever.

So how do we get these metals from these faraway asteroids? Perhaps the best way is to bring the space rocks to Earth.

When our planet was still molten, almost all of the heavy metals sank to the core, which is pretty hard to get to. The accessible veins of gold, zinc, platinum and other valuable metals instead came from later asteroid impacts on Earth’s surface. Those asteroids are the fragmented remains of almost-planets, but they contain all of the same mixtures of elements as their larger planetary cousins. And you don’t have to dig down into their cores to get it.

But the main problem with asteroids is that they are far away. Not just in space (tens of millions of miles for even the “near”-Earth asteroids), but also in speed. To rendezvous with an average asteroid, the rocket has to change its velocity by another 3.4 miles per second (5.5 km/s). And once the asteroid were mined, asteroid prospectors would be faced with a difficult choice: They could try to refine the ore right there on the asteroid, which would entail setting up an entire refining facility, or ship the raw ore back to Earth, with all the waste that would involve.

So instead of trying to mine a distant asteroid, how about we bring the asteroid back to Earth? NASA’s ill-fated Asteroid Redirect Mission (ARM) was an attempt to do just that. The goal of the mission was to grab a 13-foot (4 meters) boulder from a nearby asteroid and return it to cislunar space (between the orbits of Earth and the moon), where we could then study it at our leisure.

To move the boulder, ARM would use solar electric propulsion, with solar panels absorbing sunlight and converting it into electricity. That electricity would, in turn, power an ion engine. It wouldn’t be fast, but it would be efficient — and it would eventually get the job done.

In fact, a recent study found a dozen potential asteroids, ranging from 6.6 to 66 feet (2 to 20 meters) across, that could be brought into near-Earth orbit with a change in velocity of less than 1,640 feet per second (500 m/s). And the solar electric propulsion schemes cooked up for ARM would be perfectly capable of that, although it would take a while. Once an asteroid is in near-Earth space, many of the difficulties of asteroid mining are significantly reduced.